The sixth class pupils from Scoil an Spioraid Naoimh recently did their school and country proud as they took first place in a recent Eurovision style song contest final. 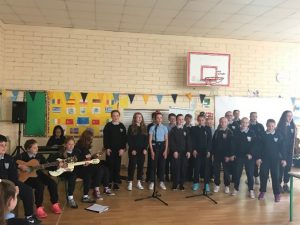 This was part of an Erasmus+ funded project.  The winning song with lyrics composed by the pupils themselves was entitled ‘We Are Europe’. Each school in each country was given the same tune to work with and encouraged to create lyrics about Europe and friendship.  Pupils also sang and played all musical instruments themselves including ukuleles, guitars, keyboard, viola, trumpet, beatbox and shakers.  From start to finish, this was a memorable experience for all involved with the song and preparation for the contest. After months of practice, the day finally came. The final round of voting proved to be very tense. As our judges conferred, we listened in anticipation as the scores rolled in from country to country. Finally the last score came in and we were ecstatic because ………. WE WON!!!!  Ireland beat Romania by just one point. We would like to thank all our co competitors and members of the Irish jury: Elisabetta Harding, Gerry Simpson, Jim Walsh, Sophie Alwright and Jacob O’Dowd. We are so proud of the children and teachers for all the effort they put into this great achievement. 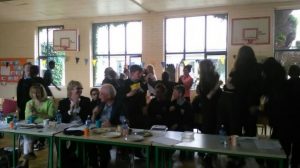 We are extremely thankful to be given the opportunity to participate in “A Song for Europe -12 points”. We didn’t only love performing but also watching other countries perform their original songs. Go to www.ssnlaytown.ie to see the winning performance.